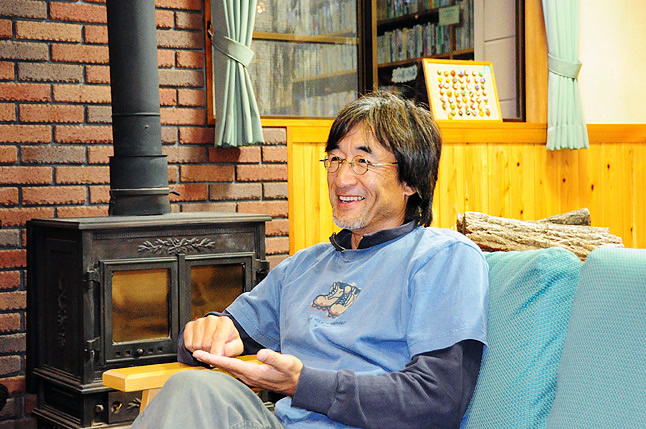 Encounter the miracle on the Trail

Shin-etsu Trail Stories is a collection of stories rediscovering the unique charm about the Trail that fascinates people. Appropriately, then, the first story in the series features Noriyoshi Kato, the man who more than anyone else is responsible for the Trail’s founding.

Kato-san was one of the first people to introduce the long trail concept to Japan. He was involved in the Shin-etsu Trail project from its initial stages, contributing to the Trail concept and the maintenance and operating systems. The philosophy and methods Kato-san used have become a model for the creation of subsequent trails in Japan, and as a foundation for a unique long trail culture for Japan.

In 2010, two years after the opening of the entire 80-kilometer course originally planned for the Shin-etsu Trail, Kato-san developed amyotrophic lateral sclerosis (ALS), an intractable disease. Despite his worsening medical condition, he continued to write and give lectures right up to his passing on April 17, 2013, at the age of 64.

This interview with Kato-san was originally titled Let’s Walk the Shin-etsu Trail, and was part of Meet the Miracle in the Trail, posted with the consent of the original publisher, Office M.

The Shin-etsu Trail: people find it fascinating; will it drive you on to a long-trail journey. This story highlights Noriyoshi Kato philosophy, the history of the Trail’s foundation, and the local people who support the Trail. To rediscover the “something else” within them, the Trails (thetrailsmag.com) editorial team has for many years created a series of articles covering the Shin-etsu Trail.

I grew up in Saitama Prefecture, where there is no snow; when I was a boy, every time there was heavy snowfall in winter, the newspaper would have a photo of a snowplow on the Iiyama Line. For some reason, I really wanted to see the heavy snow, and ever since I was in primary school I thought about Iiyama, a place I’d never been. I finally did visit when I was in junior high school. At the time I was involved in the Student Village begin held at the foot of Mt. Kuroiwa, spending about three weeks there during my summer vacation. It only cost ¥400 per night, with three meals. That was my first Iiyama experience. 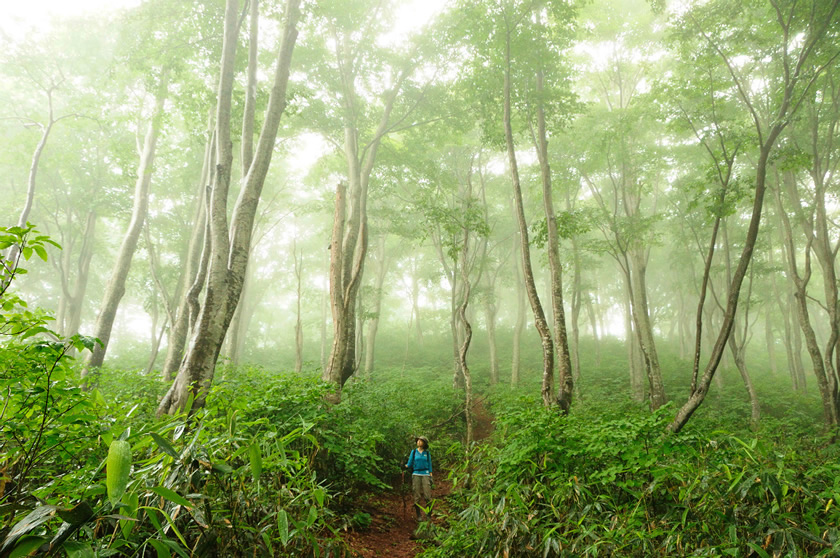 The Shin-etsu Trail, passing through the beautiful beech forest of the Sekida Mountains

Up to that point, a movement to preserve a natural area had never been successful. Local citizens had never successfully beaten the country. The project was cancelled after 530 trees had been cut down in Shiretoko, while in Nabekura the people of the Atsui area played a central role in protecting the beech forest.

These two events were catalysts in changing the function of forest administration. I, as a journalist, happened to be there at that turning point.

People now say, “One day this guy who looked like a hippie came here.” The Iiyama Beech Forest Club became the trigger for the creation of the Shin-etsu Trail, and it’s true that I used to go to the Nabekura Kogen for interviews looking pretty much like a hippy. For some reason, about that time there was a decision to “consult with that guy” About creating a trekking route in the mountains, which in turn began the movement which led to the Shin-etsu Trail. 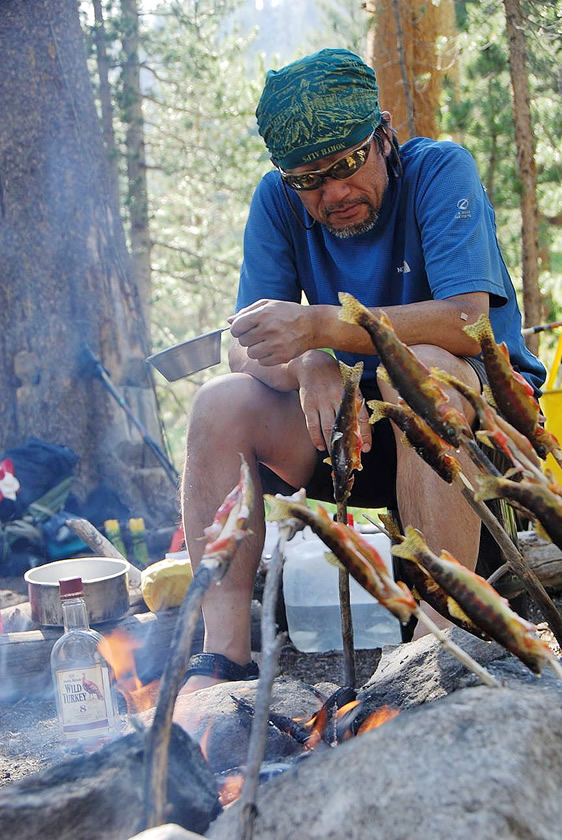 Noriyoshi Kato: backpacked the long trails of the US

Working to create a trail beloved by locals

Working to create a trail beloved by locals At that time, I was backpacking various trails in other counties, and I began to wonder if it would be possible for the Japanese people to have the wonderful experience of long trails. That was the timing, and realizing that I should realize my dream here, I made a request. 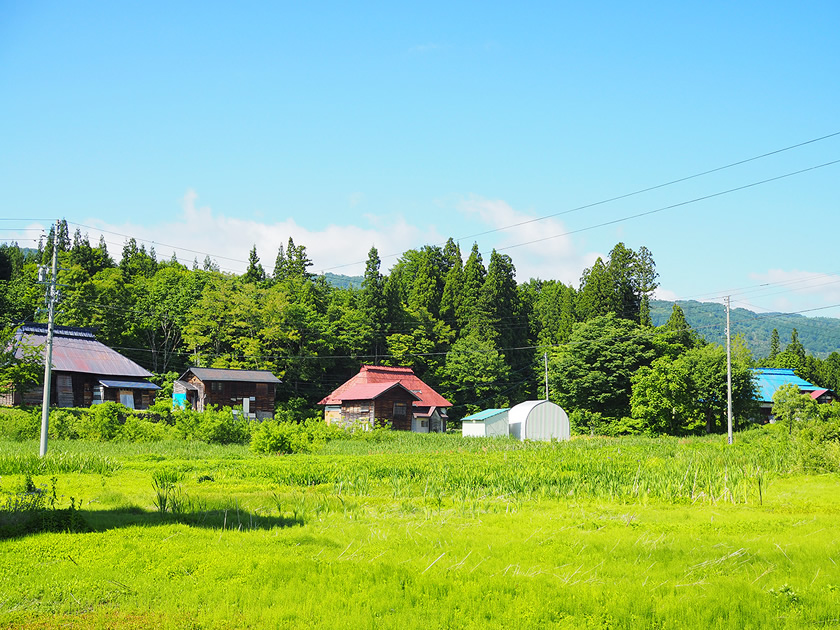 Life in a traditional Japanese village

Japan is one of the most mountainous countries in the world, but when climbing—what in Japan is called “peak hunting”—it’s a vertically-oriented activity, and the only contact along the way is with nature. Long trail trekking, however, is aimed horizontally, rather than at a summit, and passes through the world of satoyama (the traditional sustainable way of life with nature and people in a harmonious relationship), so you’re not only encountering nature, but also culture and history, and you can enjoy the contact with the people who live along the trail. The longer the distance, the stronger these become, and the experience becomes much deeper.

It’s not like the current walking boom. The decisive difference is nature. By walking in nature and coming in contact with it, you can feel the coexistence of nature and people—that’s the charm of long trails. In other words, it’s a bridge that connects nature and people.

At the base of the Shin-etsu Trail philosophy is first of all the conservation of the ecosystem—to create a trail that looks like it was scratched in with just a fingernail. In other words, we don’t use heavy machinery but instead created by hand. Next is a cooperation of prefectures and municipalities, a relationship that had never existed in Japan, along with the cooperation of the local forestry management office, and a tight relationship between the public and private sectors. Even more importantly, volunteers will participate in the maintenance of the Trail. This was the thinking with which the Shin-etsu Trail was created. 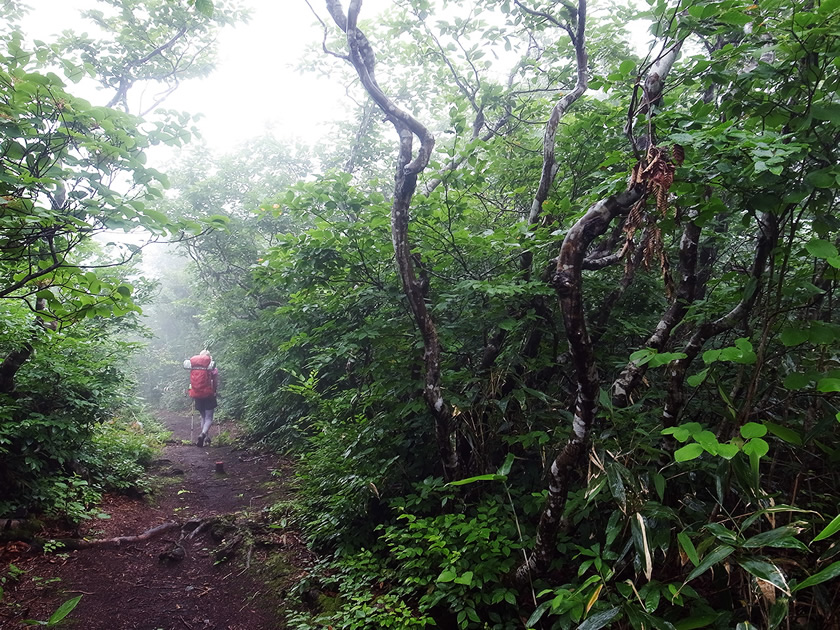 Unlike a lumbering road cut with heavy machinery, the Shin-etsu Trail was created by hand, for a trail that looks like it was scratched in with a fingernail.

An important pillar for the use of the Trail is that it should be created as one that is beloved by the local people. I’m now doing hands-on learning with local primary school students, having them walk the Trail as a school event, something that is now spreading. It’s a place for nature education, as well as a place to reaffirm the wonderful local history and culture. I tell the students that, even if they travel out to different places in the future, I hope that they will love their hometown and take pride in it.

I like pristine nature as much as I also like the nature that is related to people. Originally [people couldn’t live without nature, but now we are in an age where we can live without nature. This is strange. The Japanese, who originally lived close to nature, must still have the wisdom to live in nature. It’s a philosophy of living, not of knowledge. This really grew in me. I was really thinking about the priority of knowledge, and that something is crazy in our modern situation. Recognizing this, we need to incorporate “naturalness” into our lives. 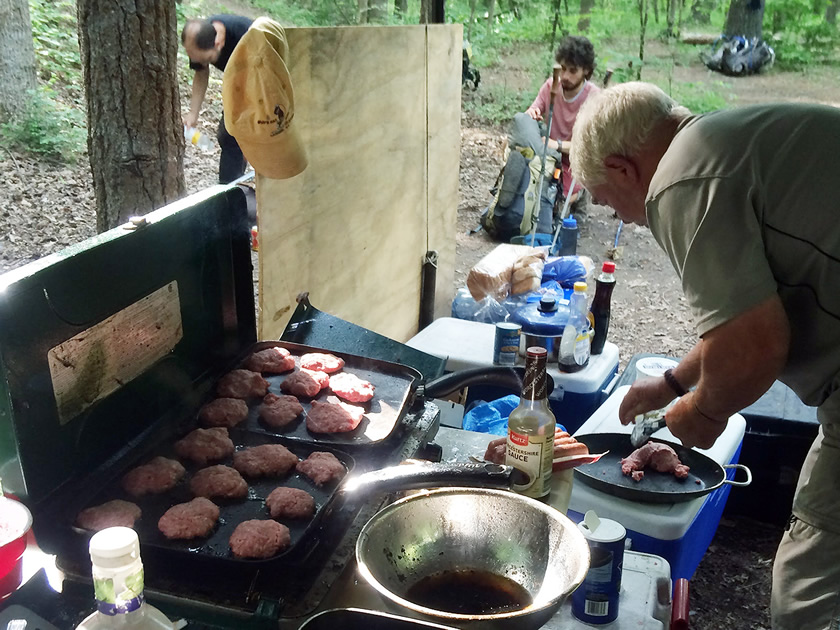 Local “Trail Angels,” serving hamburgers on the Appalachian Trail. They support hikers, who look forward to the Angels’ hospitality.

In 2005, I spent 187 days walking the 3,500 kilometers of the Appalachian Trail in the US, a half-year that was so absorbing that it took over my life. The people I met along the Trail all had their own lives, so I walked along with a variety of dramas. Many of them were at a crossroads in their lives, while my walk on that super-long trail was the starting point for me. The scale of the trails is completely different, but the Appalachian Trail represents a satoyama world not unlike that on the Shin-etsu Trail.

What’s great about it is that the locals respect the backpackers who are hiking through their area, and they provide a variety of support. For example, when you take a break from the mountain and come to a road heading to a town, you can hitchhike in to get some food and take a shower. Hitchhiking can be dangerous and is prohibited in some parts of the US< but here most anyone will pick up a backpacker. Backpackers call these local people the Trail Angels, and the support they provide is Trail Magic.

Along the Appalachian Trail, you can encounter a variety of miracles and touching events including these meetings with local people, and that is a major attraction. There are so many magical stories to be found on long trails—just like life itself.

A trail culture taking root all over Japan 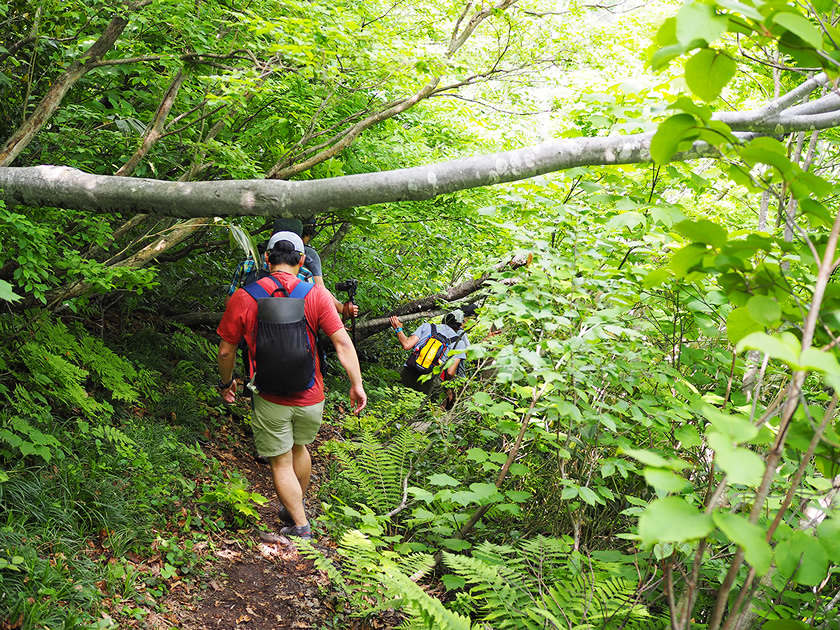 Hikers on the Shin-etsu Trail

Today in Japan there is a movement to create more long trails like the Shin-etsu Trail. Many regions asked me to give a lecture, where I actually walked around the sites and worked with them. The Shin-etsu Trail is seen as a great success story, and by using it as a case study in creating new trails, we are also trying to engage in regional revitalization.

What I can do is walk the trail, gather my ideas, then provide thoughts on trail-making looking at it from both the viewpoint of nature and that of the user, too. But I alone don’t have the power needed to embody the concepts, actually make the trail and then sustainably manage and operate it. For the Shin-etsu Trail, that role is taken on by the Shin-etsu Trail Club non-profit organization.

An important point is that even if you make a trail, it’s such a warm and humid country that, if you don’t maintain it sustainably, after just a few years the vegetation will grow and the trail will disappear. No matter how earnestly the Trail was made for the benefit of nature, for nature it’s just more worm food. So it’s very important that we improve the management organization.

Noriyoshi Kato has a special feeling for the Shin-etsu Trail, which embodies his philosophy

Including the approach section, the Shin-etsu Trail has a total length of 80 kilometers (now of course expanded to 110 kilometers—editor), and because it is the birthplace of long trails in Japan, I hope that we can make use of what we learned here to create wonderful trails all over Japan. I just hope it doesn’t become a sudden fad, which is often the case.

I still think a lot about the Shin-etsu Trail. One idea is to extend the length of the Trail, going from the Sekida Mountains to the east and the west. I often dream of a magnificent Joetsu Trail, one that goes in the east from Akiyama-go to Mt. Naeba and Mt. Shirasuna, and in the west to Sasagahara Kogen, Mt. Amakazari and Mt. Shirouma—crossing all the borders of the Shin-etsu region.

Born 1949. A writer, his themes were often on long trails and the preservation of nature. A leading figure in long trails in Japan, he contributed to the creation of long trails in Japan, such as the Shin-etsu Trail and the Michinoku Coastal Trail. His books include John Muir: Saint of the Forest, Father of Nature Conservation; Hiking the John Muir Trail: Backpacking 340 Kilometers; Aiming for the Main Forest: Walking the 3500-Kilometer Appalachian Trail, and The Adventure Called the Long Trail. He developed amyotrophic lateral sclerosis (ALS) in 2010, but continued to write and lecture until his death in 2013.