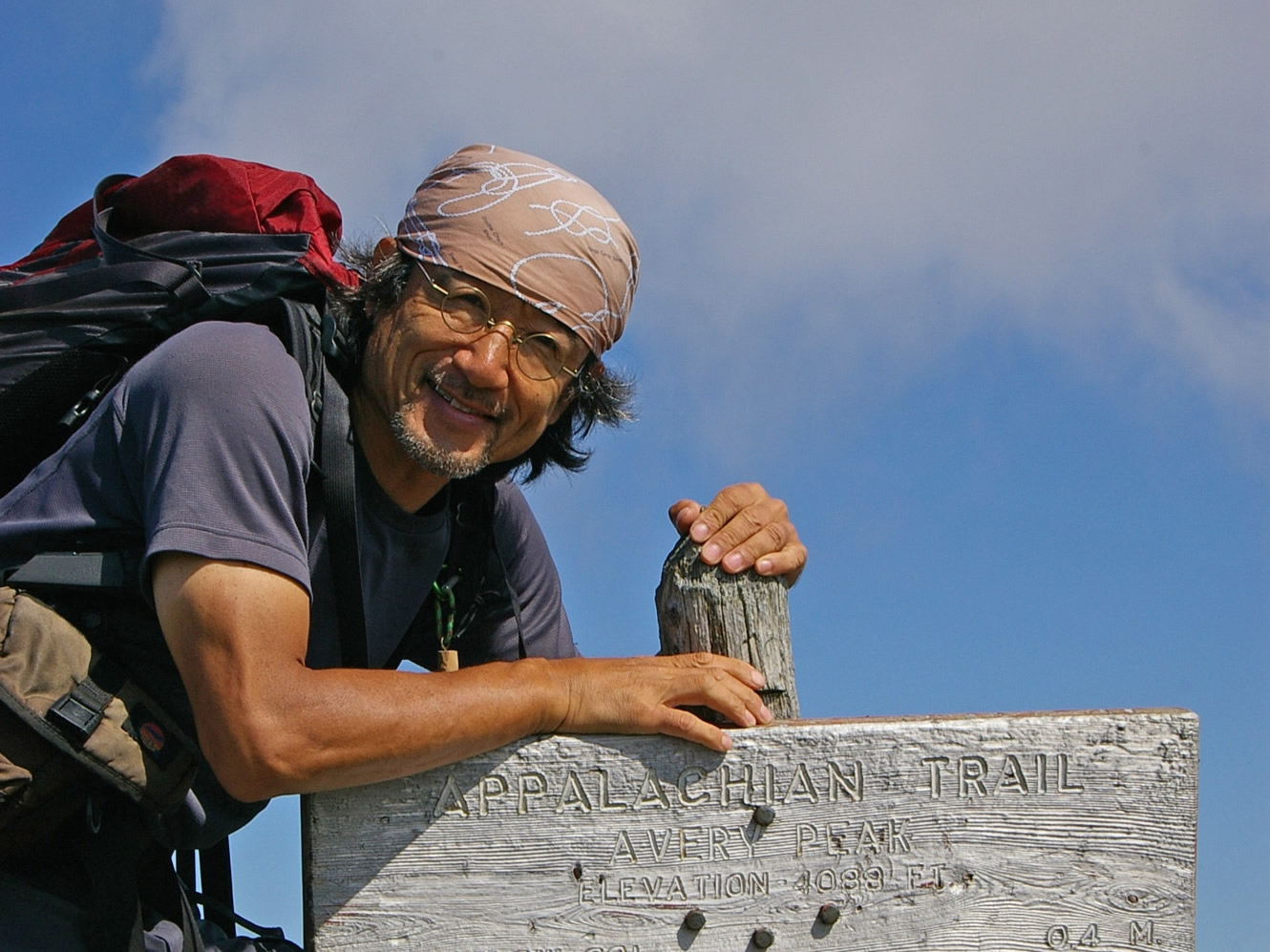 #5 The life of Noriyoshi Kato

A rebellious spirit, and a hope for long trails

Many hikers and mountaineering enthusiasts recognize Noriyoshi Kato as the leader in log trails in Japan. But if one looks at Kato-san’s personal history, you might be surprised to find that this man who became so prominent in the area of long trails only started, in his life of 64 years, to be involved with trails after the age of 50.

What life did Noriyoshi Kato live, and how did he become so connected with long trails? When he first began to introduce the long trail concept into Japan, few people understood the appeal. Still, he persisted in telling people all about the idea. What did he feel and think about long trails?

The Trails editorial team, which has long produced articles on both domestic and international trail culture, carefully traced back through the books, articles and lectures Kato-san left behind in 64 years, talked with his family and looked at the environment of the times in trying to piece together a history of Noriyoshi Kato. 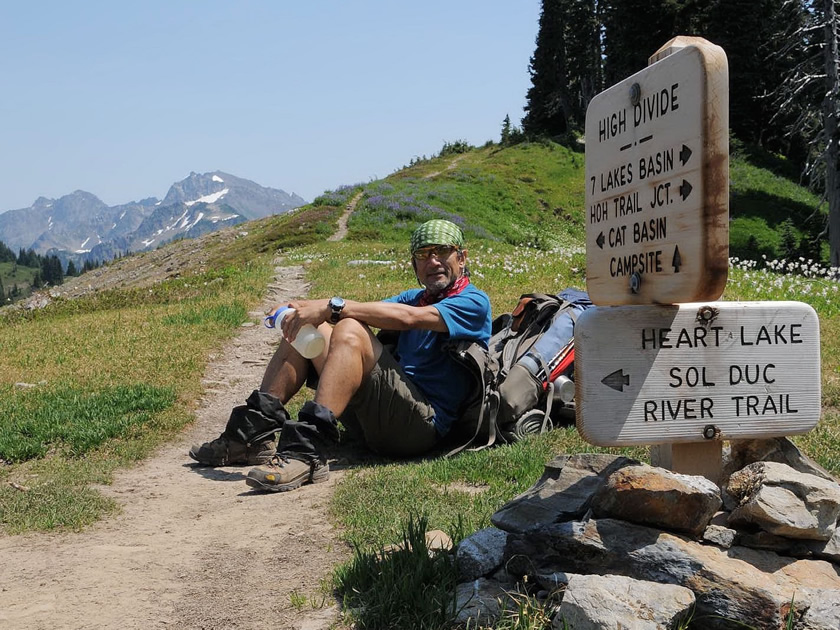 The two major themes remaining at the end of his life: long trails and national parks

After graduating from universities, Kato-san aspired to be a journalist and applied to newspapers, but his hopes did not come true and he worked for publisher Kadokawa Shoten. Later in his 20s he worked as an editor for a literary magazine. He worked at the magazine until he entered his 30s, then ran a hotel in Yatsugatake, living in the mountains, for 10 years. In his 40s he became an independent writer, focusing on his writing activities. One of his finest works, John Muir: Saint of the Forest, Father of Nature Conservation was published when he was 46. Up to this point he was best known as a journalist studying nature preservation rather than an outdoor writer explaining the attractions of long trails. 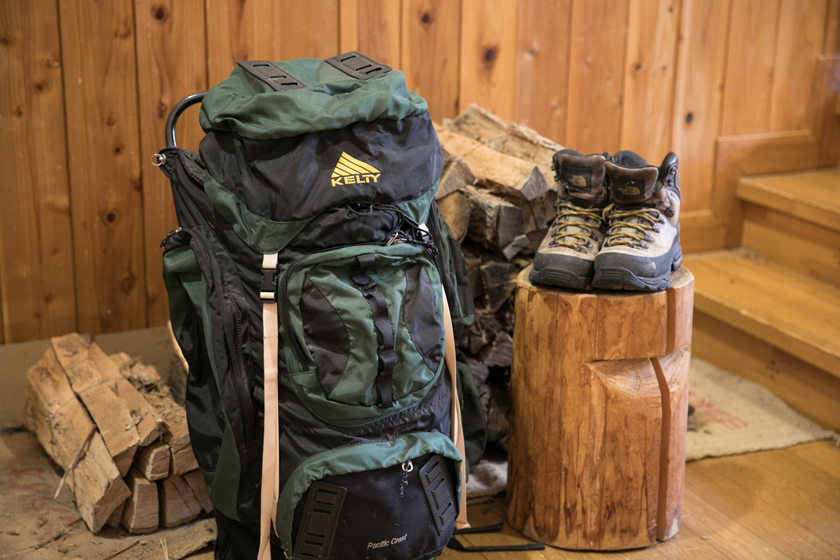 The Kelty backpack and North Face shoes used by Kato-san

Kato-san’s first full book on long trails was Hiking the John Muir Trail: Backpacking 340 Kilometers, released in 1999 when he was 51 years old. The book became the bible of Japanese travelers who wanted to hike the John Muir Trail.

About this time, Kato-san introduced the long trail concept, the background of US national parks and the nature conservation thoughts of John Muir, and passionate about spreading these ideas in Japan.

Unfortunately, when he turned 61 in 2010, he contracted amyotrophic lateral sclerosis (ALS). His condition continued to worsen, but he continued to write and speak as much as possible until his death on April 17, 2013, at the age of 64. 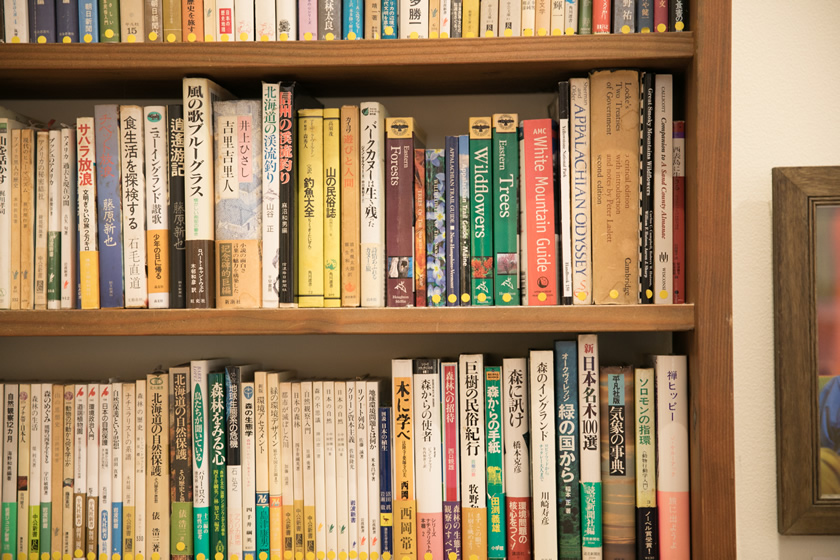 Books owned by Noriyoshi Kato in the Nabekura Kogen Mori no Ie. He was interested in culture, society and history as well as the outdoors and nature.

There is documentation from a lecture that Kato-san presented about a year before his death. The lecture was hosted by Tokyo outdoor shop Hiker’s Depot. The store specializes in ultra-light and long-distance hiking activities, so among the audience for the speech were many hikers who had dreamed of hiking a long trail.

“My two major themes now are long trails and national parks,” Kato-san said. “I have an illness now that means I can only work two or three days a week. I can’t even type on the computer anu more. I use a roll-wheel mouse, and it just takes me too long to type even a little bit. So it’s impossible for me to write a manuscript or a book.

I didn’t chose this, and apart from my main things I’ve pretty much scrapped everything else. In a lot of ways I just can’t afford this. So my themes of long trails and national parks is remaining to the end, and I want to tell this to many people. (From the lecture Walking in Nature; Learning from Nature, presented in February 2012).

The ideal form of traveling and nature preservation, seen on the long trails and in the national parks of the US

Kato-san spent the last years of his life conveying the concepts of long trails and national parks. Why were these themes so important?

By tracing the history of Kato-san’s life you can feel a sense of mission as a journalist, not only for his respect and affection for nature but in seeking a better world, and proposing it publicly.

The national parks created by Muir feature an excellent nature conservation system. One method is to limit the number of people, to prevent damage to nature due to overuse. Hikers also have to promise to protect the nature along the trail. These kinds of rules and methods are in place to protect nature. Muir wrote that the actions people who enjoy nature should take includes protecting nature; Kato-san was very impressed by this and felt the importance of preserving Japan’s wonderful natural resources, too. 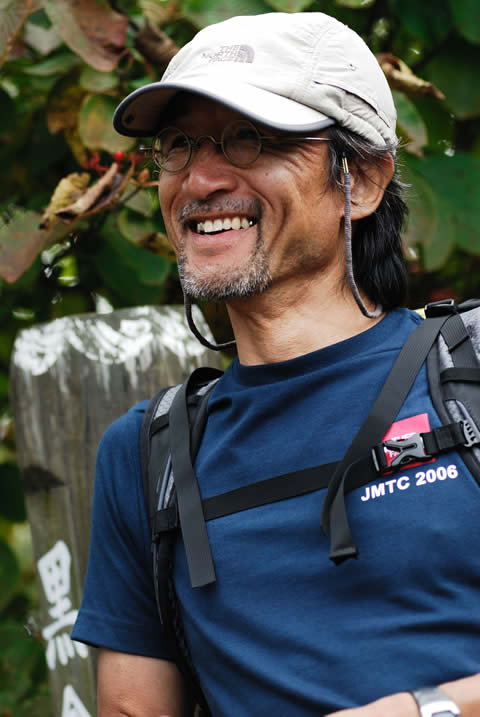 Noriyoshi Kato trekked through national parks and on long trails in Japan and abroad, publishing his ideas and findings in books and magazines 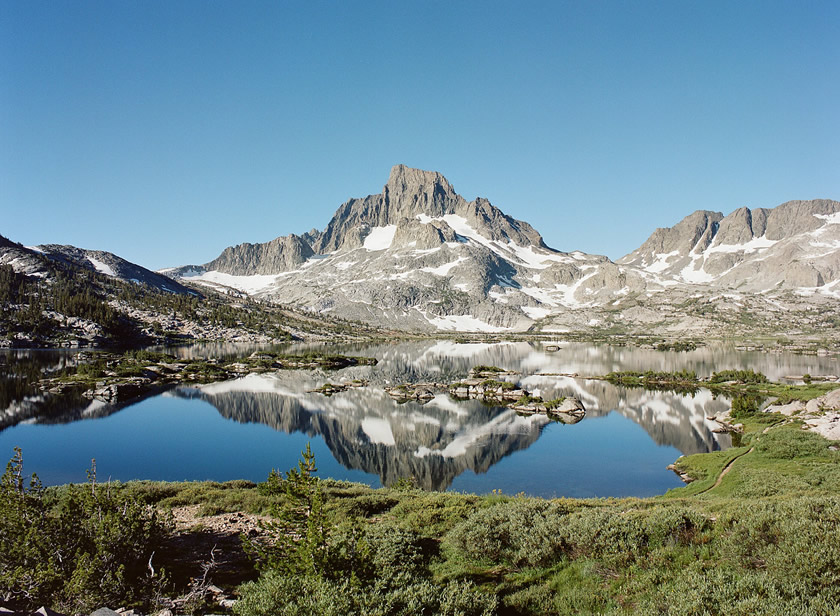 A view of the beautiful John Muir Trail, protected by the nature conservation methods and rules of the national parks

The interest in long trails started by the encounter with John Muir spreads to the Appalachian Trail, an even longer trail. It was created in 1925, and stretches over 3,500 kilometers, and is a trail that incorporates much of America’s culture and history. It spans 14 states and is maintained by citizen volunteers.

Kato-san found the Appalachian Trail to be the ideal long trail. “It’s not just about nature,” he said, “but is a walk that connects nature, culture and history…. The longer you’re on it, the more you can experience the diversity of history and culture. You’ll have a deeper, warm, heart-to-heart communications with people.”

The national park that Kato-san talked about is an idea and a methodology for preserving the beauties of nature. While a long trail means traveling in nature, it’s also an ideal form of travel for feeling nature and more deeply understanding people. More people will feel a connection with the essence of national parks and long trails. Until his final days, Kato-san hoped that while preserving Japan’s wonderful nature, that at the same time more people will be hiking through it.

Although people didn’t see the attraction of long trails, this rebellious spirit continued to convey the message 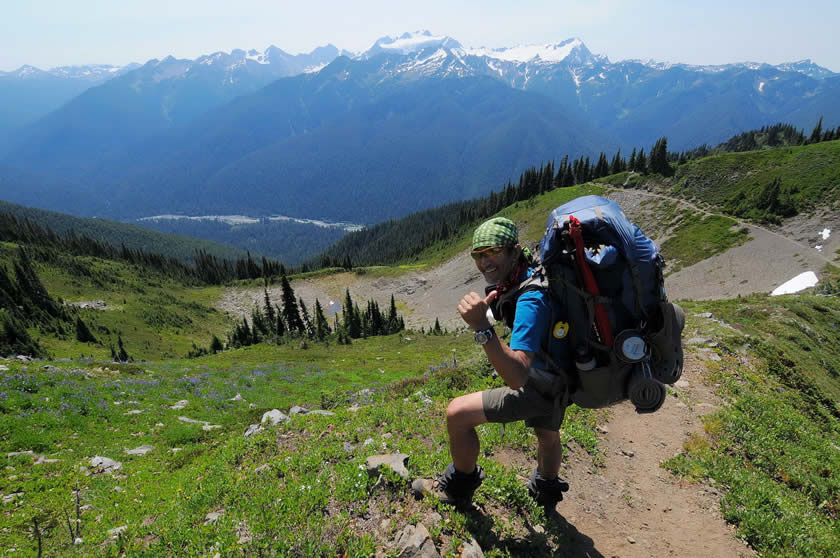 Kato-san on the long trail; he carried a camera and computer to record the journey

It took a long time, patience and determination until the ideal of long-trail journeys and long trails were understood.

He often contributed articles on long trails, including article series, in Outdoor magazine from 1998 to 2001.

“I had a series of articles on long trails in Outdoor magazine,” he said. “Very few people got it. If there was an article about climbing a mountain up to a peak, people would read the article. I also like climbing to a peak, but I also want to introduce a way of enjoying nature where this is not the case. I’ve been thinking about this for a long time.”

In Japan at that time, very few people appreciated the value of long trails. Kato-san, however, had a strong conviction, and a sense of mission. He was 56 years old in 2005, and the 3,500-kilometer Appalachian Trail takes 187 days to complete. Kato-san’s book, Aiming for the Main Forest: Walking the 3500-Kilometer Appalachian Trail, which is a travelogue summarizing the journey, is a 640-page book, a major work much thicker than an average Japanese-language book. It is a book that has a rebellious style.

It seems that his sometime excessive obsessions was something he shared with his father, Katsumi. In the postscript of Aiming for the Main Forest, he spelled out his thoughts about his father.

“I finished the epilogue in May of 2010, eight days before my 94-year-old father’s life came to an end,” he wrote. “My father was a poet and a singer, and he always watched over me both severely and kindly as worked as a writer traveling through nature.” 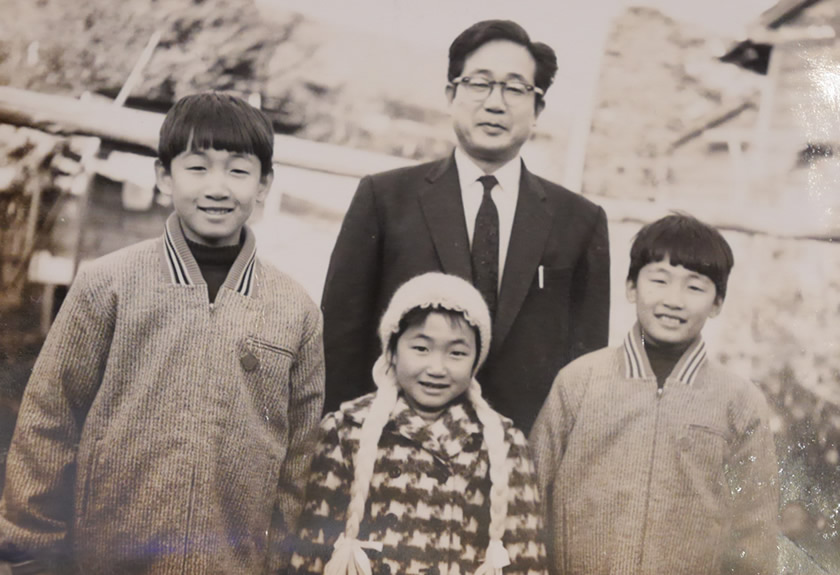 Noriyoshi Kato as a boy (left in photo), with his father Katsumi center back (photo courtesy Masayoshi Kato)

Katsumi Kato was a poet who incorporated avant-garde expressions to create his own tanka style. At the launch of The Kaijins (Contemporary Poets) Association, he was asked by the Emperor to sing a song, one of his many accomplishments.

Noriyoshi Kato’s younger brother, Masayoshi, talked about his father. “My father admired the poet Shinobu Orikuchi, and, wanting to be a deshi (disciple), entered Kokugakuin University. In the end, though, he didn’t become a deshi. He said, ‘If you get into the pocket of a big name, I’ve been told many times, you’ll lose your creative freedom.’ ”

Just as his father created a new style of tanka poetry, his son, Noriyoshi, responded to traditional mountaineering by spreading the message of a new form of travel, hiking long trails. Responding to the existing, the rebellious spirit of trying to make something new is a contact with his father’s way of life, and something Kato-san inherited from him. 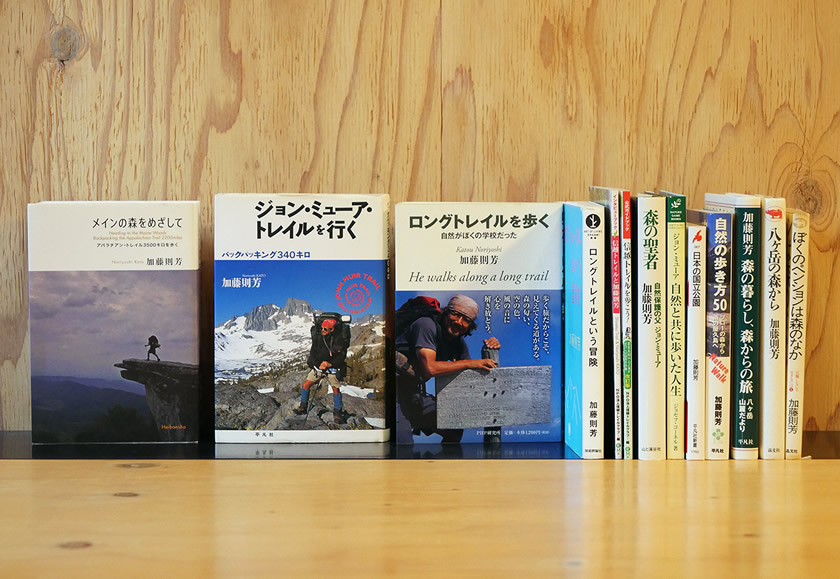 The works of Noriyoshi Kato: Hiking the John Muir Trail: Backpacking 340 Kilometers; Aiming for the Main Forest: Walking the 3,500-Kilometer Appalachian Trail; The Adventure Called the Long Trail, and more. He also wrote on national parks and natural conservation in John Muir: Saint of the Forest, Father of Nature Conservation