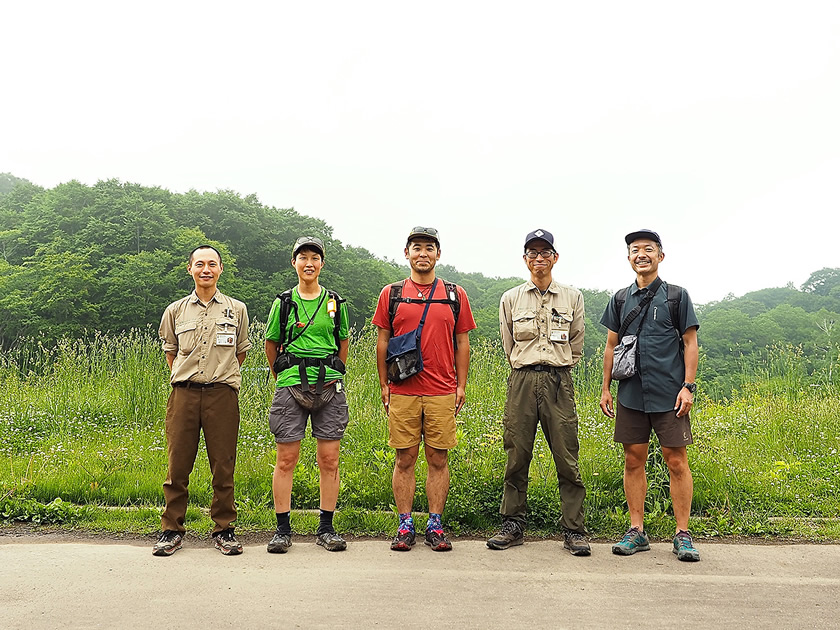 #03 Volunteers
continue
to protect the Trail

How to build and maintain a long trail

Most of the people who participate in Trail maintenance are local people and volunteers, including hikers. People want to do something to protect the local nature and the playgrounds of the mountains and Trail and come together as volunteers.

This third Shin-etsu Trail Story reports on the maintenance of this long trail, and the volunteer people supporting it. This includes the maintenance system, the thoughts of the local people, and on volunteering to participate in Trail maintenance.

How does the Shin-etsu Trail attract people and drive them to talk on a long-trail journey? There is the philosophy of Noriyoshi Kato, the history behind its birth, and the support of the local people. They are trying to rediscover something else within themselves, something that has been reported on over many years in this series of articles produced by the Trails editorial team ( thetrailsmag.com). 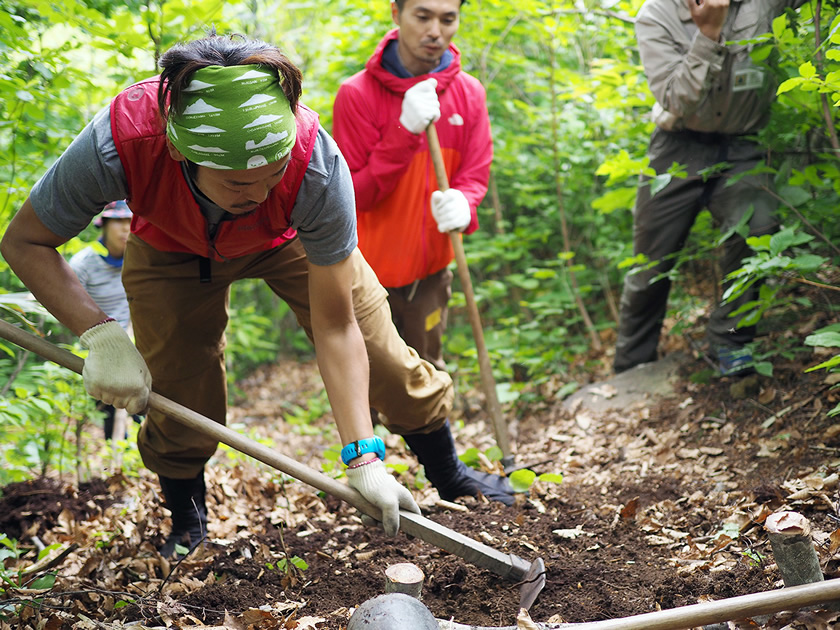 The Trail being maintained by volunteers—creating the path for hikers

The overall management of the Shin-etsu Trail is handled by the non-profit Shin-etsu Trail Club. People who wish to participate as a volunteer can apply though the website, even as an individual. Even those with no experience can help maintain the Trail. All the gear needed for the work, including nata (Japanese short machetes) and saws can be borrowed. Just click here to see the page for volunteers.

The Shin-etsu Trail is located in one of the snowiest places in Japan, so most maintenance begins with the melting of snow in June. A total of some 600 people now volunteer annually. It’s volunteers who protect the Shin-etsu Trail. 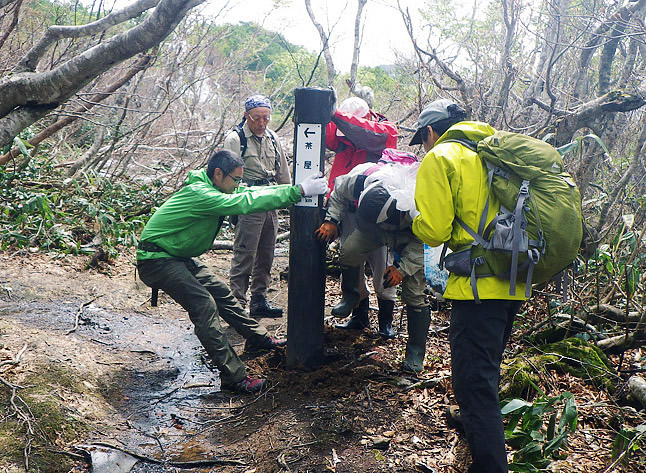 Repositioning a signpost. The Shin-etsu Trail Club’s maintenance staff is in charge of the overall project

The maintenance work involves everything from cutting plants that are blocking the Trail to repairing the Trail itself and installing signposts. Because of the heavy snowfall in the Shin-etsu Trail area, the sheer weight of the snow can knock signposts down, while stairs can be washed away by mud and sand as the snow melts up to June, so a centralized maintenance plan is needed. 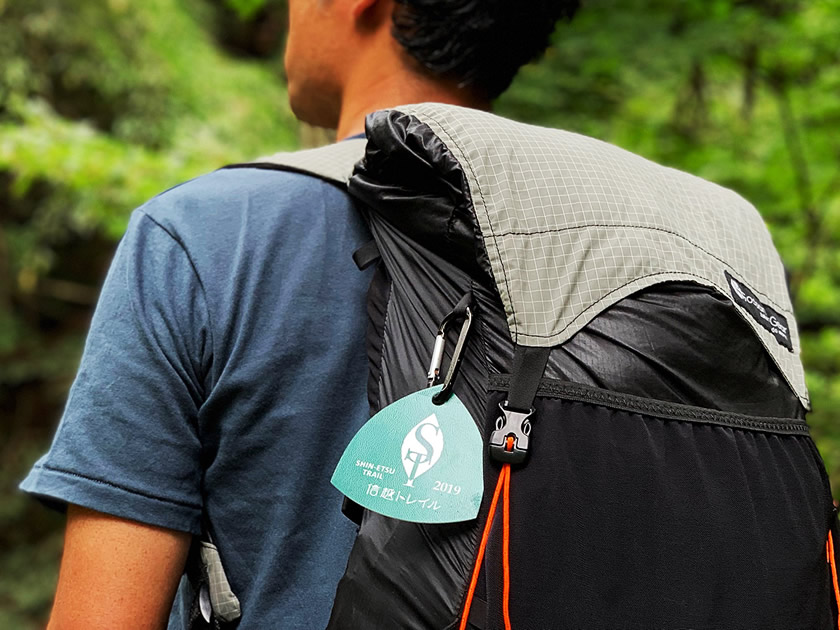 Hikers want to give back to the long trail

The Trails editorial department, along with the Hiker’s Depot outdoor shop in Mitaka, Tokyo, gather hikers together for the Shin-etsu Trail Experience Tour, held every June to join in Trail maintenance. Hiker’s Depot is an outdoor shop owned by Tomoya Tsuchiya specializing in ultra-light and long-distance hiking.

The reason for participation is simple. As people playing in the mountains, and as hikers who have experienced wonderful long trail journeys often want to give something back This is part of the culture of long trails that continues, and something we can do.

“It’s amazing that this 80-kilometer trail is so well-maintained and easy to walk. When I walked on the Appalachian Trial in the US, I met many maintenance volunteers. I realized that a culture of maintaining trails has been established there. Hikers also do maintenance on a daily basis. It’s about not asking someone to do it, I’ll do it myself—I like that stance.” 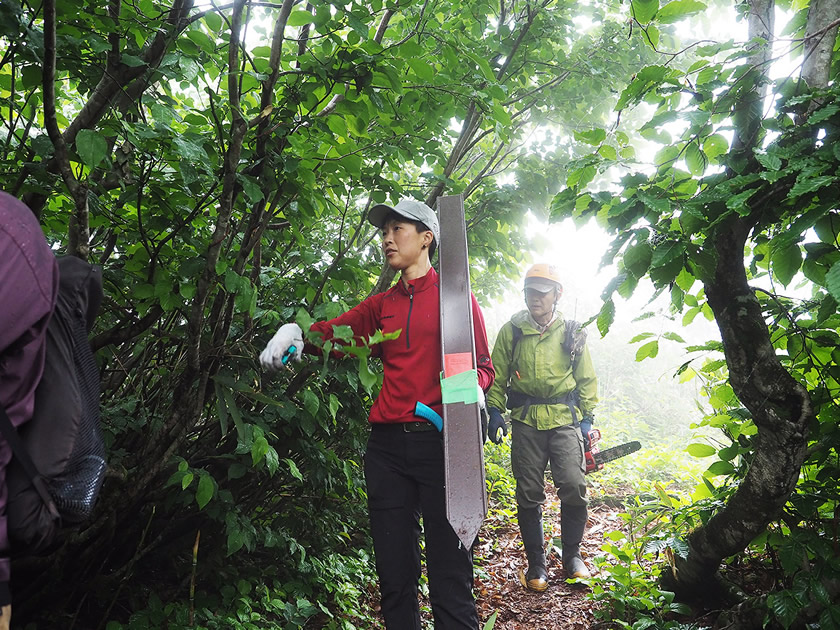 “I’ll do it myself, not leave it to others,” says Yukiko Sato, who participated in the Trail maintenance

We built this Trail ourselves!

Shin Hasegawa from Hiker’s Depot, who joins in the maintenance activities, shares his thoughts on the activity.

“A volunteer I met on a US trail said, ‘I made that trail you’re going on, so enjoy the hike!’” Mr. Hasegawa says. “He proudly added, ‘The trail you’ll be on later is a section I made a few years ago!’ I did the maintenance work on the Shin-etsu Trail, and I realized that I wanted to say the same thing.” 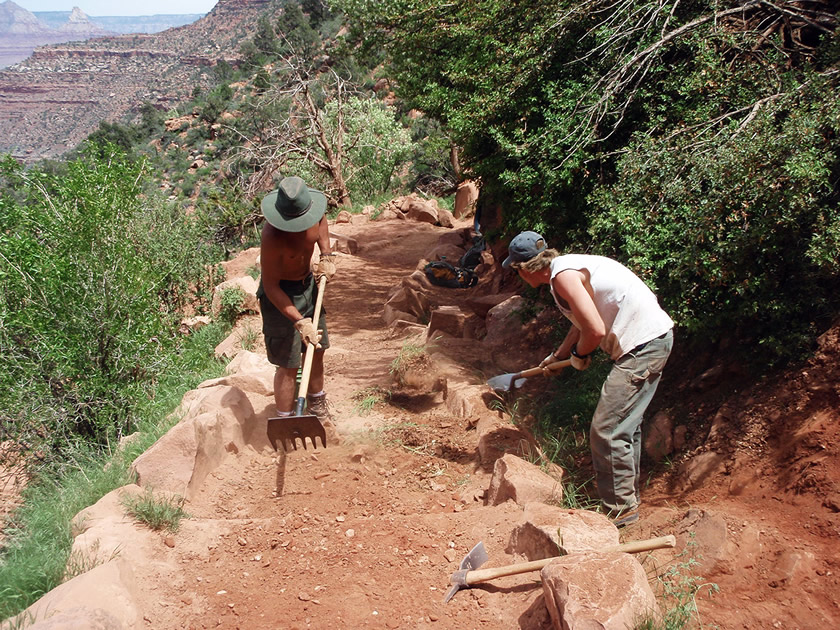 A scene from one of the American long trails

Sai-san of the Trails editorial department also took part in Trail maintenance, and had a similar feeling.

“I learned how to use a nata to process fallen trees into the materials for making stairs,” he says. “It was like finding another way to play on the Trail—it was a lot of fun. Then a hiker coming to hike the Shin-etsu Trail just happened to pass over a section we had just maintained. So I said, ‘We just made this section. Was it comfortable to hike on?’ and I felt proud of our work.” 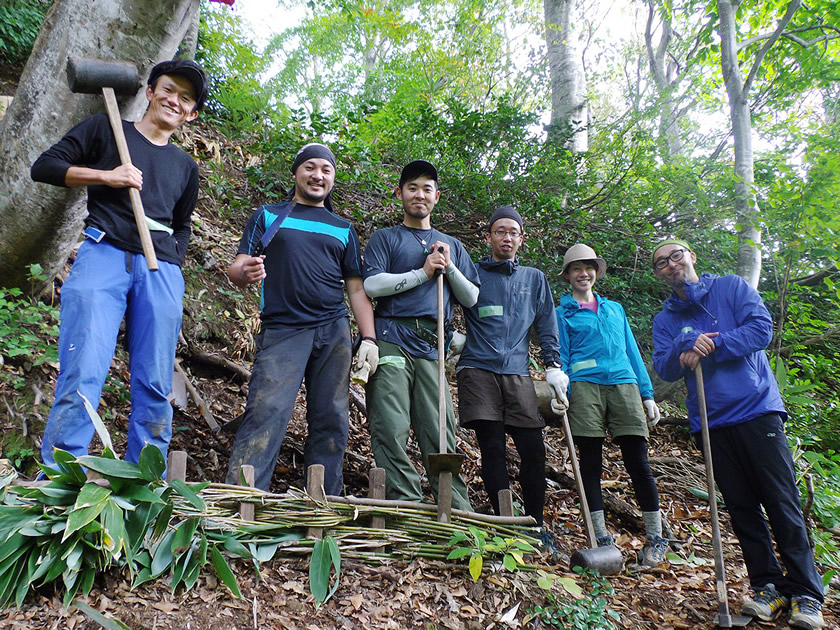 Hikers have participated as volunteers in maintenance through the annual Trails/Hiker’s Depot event, held since 2013

It’s nice to walk in the local natural world

Most of the maintenance volunteers are local people. Ryoichi Tamura from Tokamachi City close to the Shin-etsu Trail, has been in charge of maintenance since the opening of the Trail in 2008. He is currently involved in instructing and leading the volunteer staff. We asked him how he approached his work.

Tamura-san adds that he also does activities such as boy scouts, and has always been interested in backpacking and nature. It was his interest in protecting nature that led him to Noriyoshi Kato’s book; he was surprised that Kato-san was involved in the local area and then began to participate in maintenance activities. 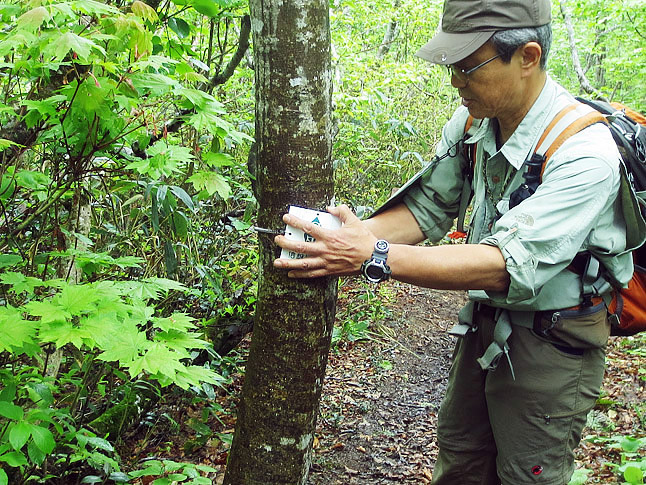 Ryoichi Tamura is one of the maintenance leaders, involved in instructing and leading the volunteer staff

“Building a hiking path is a nature conservation activity,” he says. “When you make a path, people can access nature. When they touch nature, then you can see the importance of nature. This is just like Kato-san wrote. Beyond that, it’s fun to have people hiking around—it makes me very happy.”

Like Tamura-san, people who have an attachment to the satoyama and local nature are those who are in charge of Trail maintenance.

As the Shin-etsu Trail was being created, several of the people involved visited the Appalachian Trail in the US in 2003, led by Noriyoshi Kato, a leader in Japan in long trails. The Appalachian Trail is a long trail created in 1925; it not only has a long history but is also a trail that has continued because of the wisdom that has been built up.

The people creating the Shin-etsu Trail actually experienced maintaining the Appalachian Trail, talked with US government agencies and non-profits, and learned the philosophies and methods for maintaining and continuing long trails. 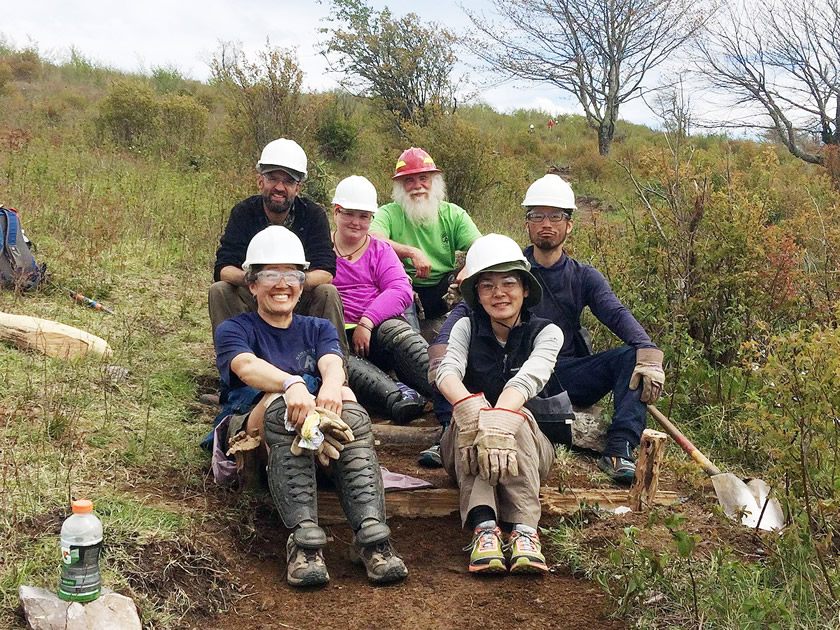 A volunteer trail crew on the Appalachian Trail. A Japanese couple who hiked the trail also joined in volunteer maintenance activities during the trip

The Appalachian Trail is about 3,500 kilometers long, and is divided into six groups of Volunteer Trail Groups, with each taking responsibility for one section. This method of dividing the areas up into groups of volunteers was adopted by the Shin-etsu Trail, too. Thirty organizations, including the government and the private sector, share the responsibilities of the areas, and work with volunteers to carry out maintenance.

An organization was also created, the Shin-etsu Liaison Committee, which is involved in information sharing and discussions of the current state of the Trail and maintenance, involving Nagano and Niigata prefectures, the Joetsu Forest Management Office, the Hokushin Forest Office, the municipalities and tourism organizations of both prefectures, non-profits and other people involved in the Trail. It plays an important role in connecting people across a wide area as an organization seeking to unify goals.

The members work together beyond the boundaries of prefectures and municipalities to maintain and manage the Trail. The Shin-etsu Trail was created to make a long trail in Japan and to be a model of nature protection.

The presentation of biodiversity is valued, so maintenance is done manually as much as possible 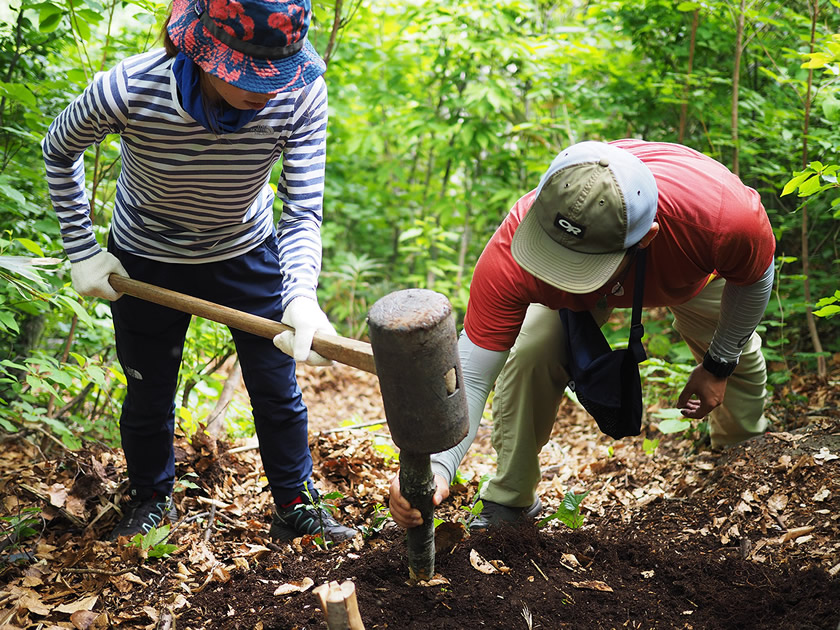 Trail maintenance is largely carried out by hand, without using heavy machinery

The long trail philosophy, as well as the maintenance system, are both important. One of the Trail guidelines is that the Shin-etsu Trail is to protect the precious resources of the Sekida Mountains, through which it passes. The fist guideline is the conservation of biodiversity.

As part of trail maintenance, precious plants have to be cut down, but the rules is that no more trees are cut down than absolutely necessary, something written into the manual. As much as possible, heavy equipment is not used in the maintenance of the Shin-etsu Trail, but rather human hands; small trees and fallen trees are used as much as possible in construction.

In a survey Trails conducted with hikers, the question was asked, “What is your reason for supporting the Shin-etsu Trail?” The top results were, “Because non-profits and volunteers play a central role in trail maintenance,” followed by, “Because its goal is to preserve the natural environment of the local satoyama.” The maintenance of the Trail by volunteers, and the policy of conserving biodiversity has become indispensable not only for trail maintenance, but as an attraction for hikers.

The Shin-etsu Trail path, maintained by human hands, is maintained so that it is one person wide. It’s what’s called a “lumberjack’s path” in Japan, a trail that extends through the growing trees and plants of the forest.

The goal is to protect the nature of the satoyama, and to treasure the long trail culture. The Shin-etsu Trail is protected by volunteers, included local people and hikers with this same thinking. 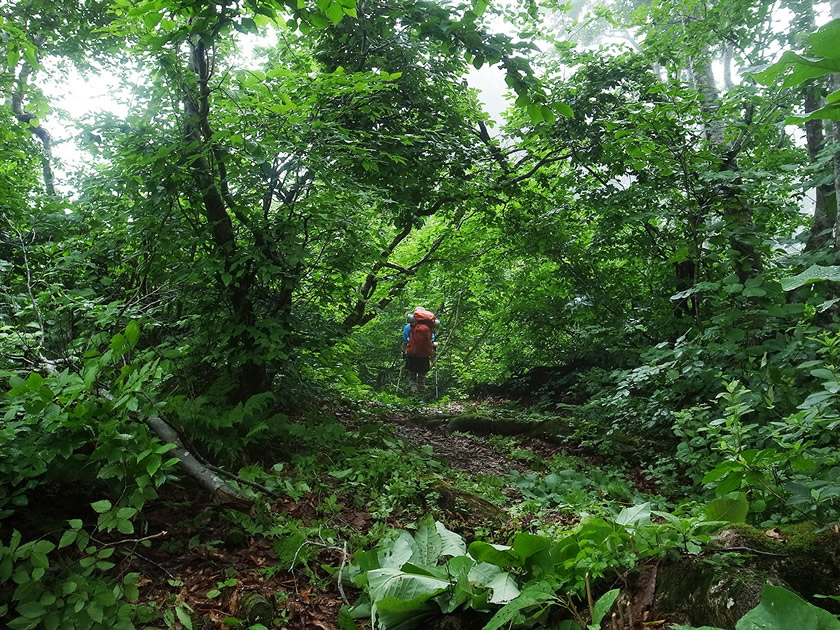 Trail maintenance is not a sense of requirement, but an act that you want to participate in to protect nature and the place in which we play. Feeling that way is an integral part of the long trail philosophy. The Shin-etsu Trail, the pioneering Japanese long trail, has shown the importance of the maintenance systems and the philosophy of maintaining the Trail.