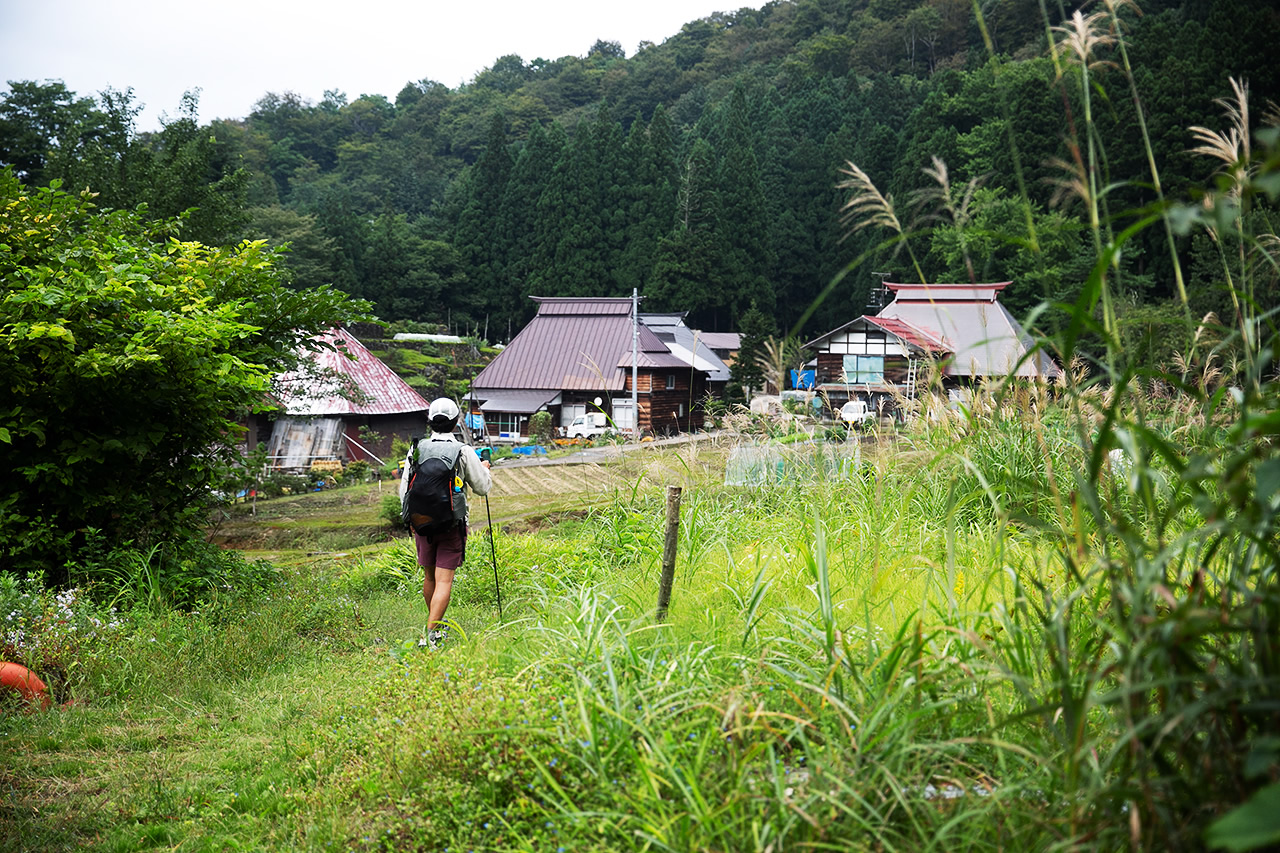 A look at the new 40-kilometer section

In the fall of 2021, the Shin-etsu Trail was extended by about 40 kilometers from Mt. Amamizu to Mt. Naeba (creating sections 7 to 10), creating a total trail length of 110 kilometers.

This extension makes it a long trail including the relatively unexplored region of Akiyama-gō, rural rice field landscapes typical of the Shinshu region, connected to the vast Alpine moors of Mt. Naeba. It is no longer only a mountain trail through the beech forests of the Sekida Mountains but an updated trail with a greater variety of hiking sections.

Taking a long hike connecting mountains and towns is the real thrill of long-distance hiking, and makes the Shin-etsu Trail much more of a long trail experience.

Prior to the opening of the new section, Nezu-san of the Trails editorial team hiked the new route. He provides this report as the first hiker to walk the extended section.

The magnificent Shin-etsu Trail; the dream of Noriyoshi Kato

It only take about an hour and a half from Tokyo on the Joetsu Shinkansen. Getting off at Echigo-Yuzawa Station, I’m wearing shorts and I feel cool air on my skin. Yukawa Town in mid-September already had signs of autumn coming. 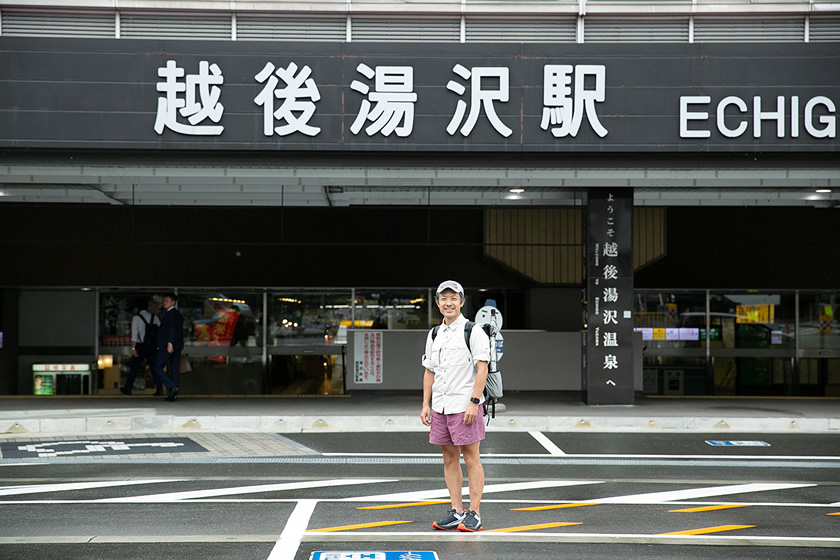 At Echigo-Yuzawa Station on the Joetsu Shinkansen line, heading for Mt. Naeba, the new easternmost point on the Shin-etsu Trail

One of Noriyoshi Kato’s dreams was to extend the Shin-etsu Trail on to Mt. Naeba.

While thinking over Kato-san’s words, I headed to Mt. Naeba. The first day’s journey was to the top of Mt. Naeba, the eastern starting point of the Trail. 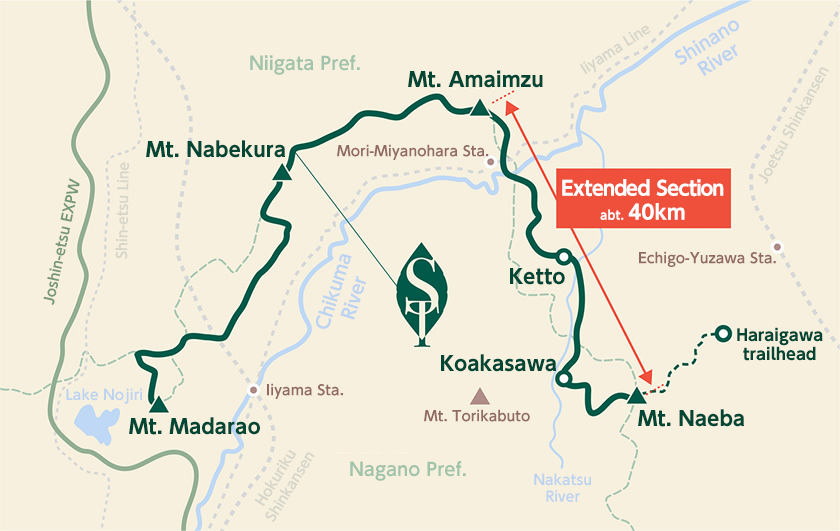 The journey on the extended route (dotted line on map)

It took about 30 minutes by taxi from Echigo-Yuzawa Station to reach the Haraigawa trailhead. When I got out of the taxi, it was raining lightly. Ah, rain, I thought, pulled out my umbrella and started walking on the paved road.

Soon I saw Wadagoya (Wada hut). This is on the slopes of Kagura Ski Area, and in winter, ski bums looking to get first tracks in the morning will stay at the hut. Climbing up the ski slope from Wadagoya, I entered the forest. 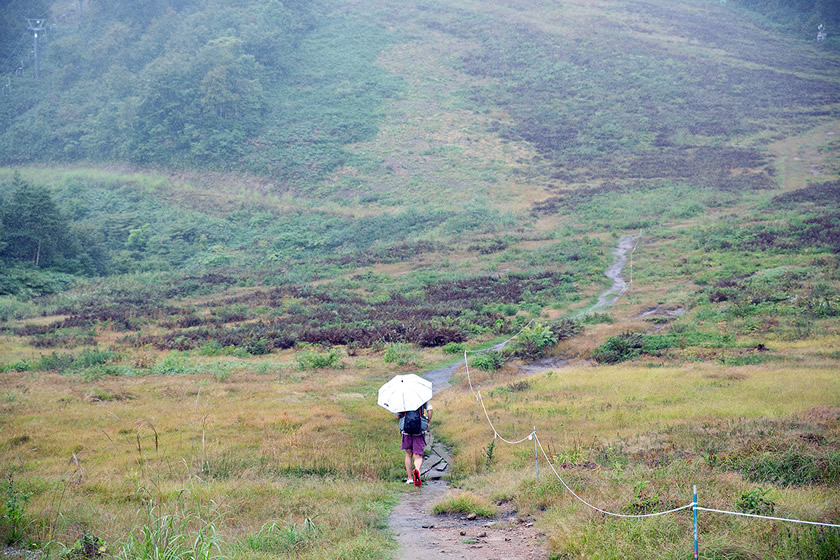 Climbing up the Kagura resort ski slopes from Wadagoya

About an hour and a half from the trailhead, the field of view began to slowly open up. There was a series of wetlands—Shimo no shiba, Naka no shiba and Ueno shiba—a turn to the left at a fork in the trail, and then a traverse of the slope began at about 2,000 meters above sea level.

The scenery changed as I went along, and I was fascinated by the mountain’s richness of expression. The rain wasn’t bothering me at all. The only thing was that the rain was limiting visibility, and otherwise it might have been possible to more directly face the nature that was in front of me. 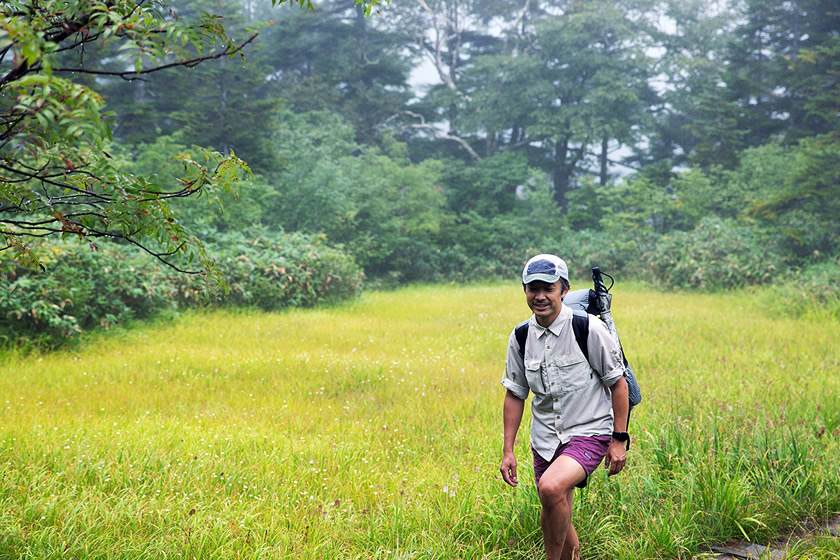 An enjoyable walk through a wetland on the way up

What was really occupying my mind more than the scenery, though, was thoughts about Kato-san, who had hoped to make Mt. Naeba one of the starting points for the Trail.

It was 12 years since the original 80-kilometer Trail opened in 2008. An extension of about 40 kilometers had been realized. And the summit of Mt, Naeba, the official starting point, was right around the corner. 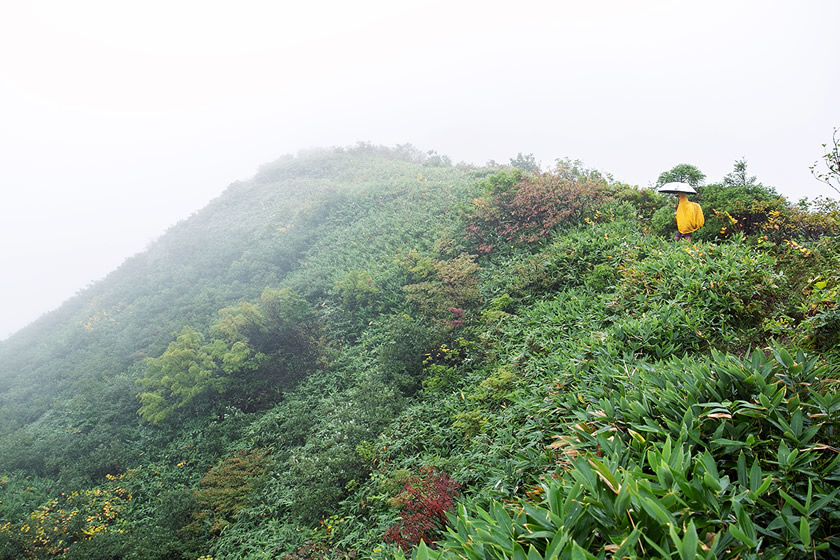 Traversing a slope, at an altitude of about 2,000 meters. The visibility was poor, but the feeling was amazing 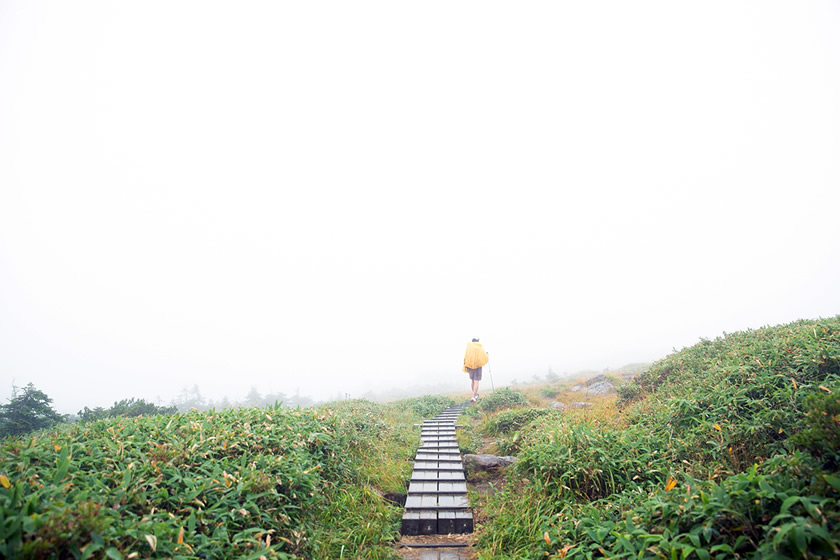 The plateau at the summit of Mt. Naeba

After climbing the steep Uno-zaka slope, my eyes popped out, as a vast grassland plateau emerged.

Mt. Naeba’s summit is at 2,145 meters, but it is shaped like a wide plateau. The Alpine wetlands have a circumference of some 10 kilometers. I don’t know of any other mountain with such a vast marshland at its summit. 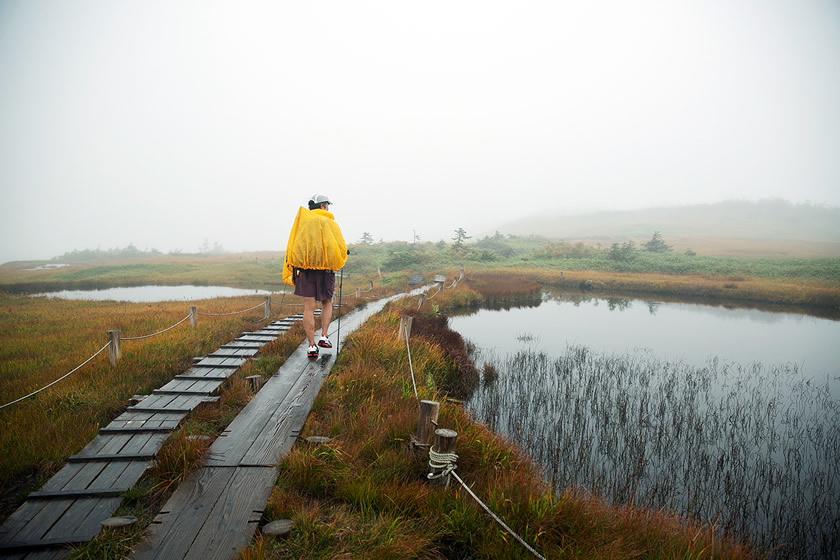 The Alpine plants growing in the wetlands look like a rice field immediately after the seedlings are planted, and this is where Mt. Naeba gets its name (nae means “seedling”)

It’s another world on top of the mountain. The mysterious view doesn’t even feel like a mountaintop. There are countless ponds here within the marshy areas.

Because it was foggy that day, it seemed more and more like an illusion.

Finally, the new starting point for the Shin-etsu Trail

Mt. Naeba stands on the border between Nagano and Niigata prefectures. This is the new eastern starting point for the Shin-etsu Trail. This provided a completely different look than the satoyama setting at about 1,000 meters, which was the characteristic of the existing Shin-etsu Trail. 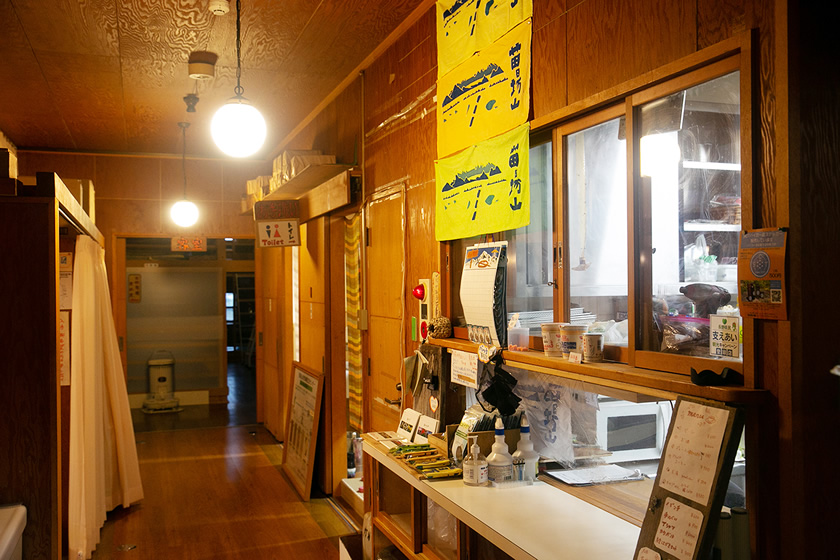 The first night’s stay, at the Mt. Naeba Activity and Community Center at the summit. It operates from June 1 to the end of October (closed in winter). Reservations required in advance

Connecting the unexplored villages of Akiyama-gō

On the second day, having trave led from the Yuzawa side over Mt. Naeba, I headed to Akiyama-gō. After the descent of Mt. Naeba, the hike went through a series of the villages of the Akiyama-gō area, scattered across the foot of the mountain. 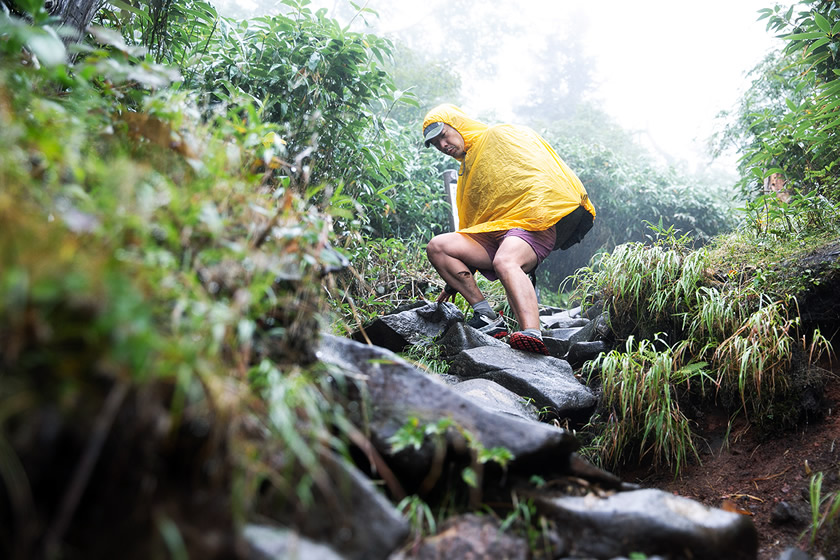 It was raining and slippery, making for a somewhat thrilling descent of the Trail

The day journey was rather long. I departed the summit of Mt. Naeba in the early morning, then headed down the Koakasawa course. It’s a tough part of the Trail, with large and rugged rocks, and the roots of huge trees stretching out across the Trail.

After the descent from the mountain, I arrived in Koakasawa Village in Akiyama-gō. 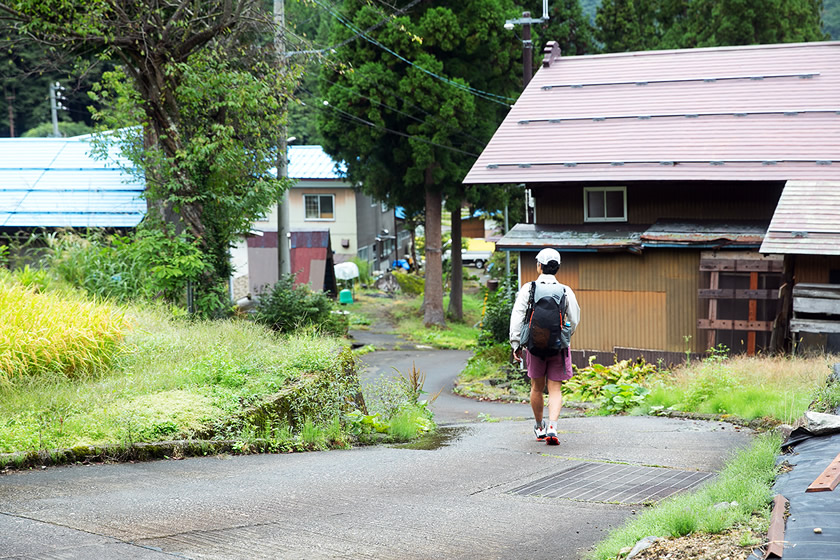 The quiet, calm Koakasawa Village. The roofs are typical of the type used in this land of heavy snowfall.

Between Mt. Naeba and Mt. Torikabuto on the Shinetsu border is a deep canyon called Nakatsugawa Valley. The 13 villages scattered along this valley are collectively called Akiyama-gō.

Why is Akiyama-gō said to be “unexplored?” I wondered about that, so I did some research. It seems that Akiyama-gō was something of a land island, a place especially difficult to access, even in Shinetsu, a land of heavy snows. It was a remote world, cut off for long periods of time from the outside world. Because of this, many elements of an ancient lifestyle live on here, and the area is a rich treasure trove of folklore.

You won’t encounter this just by hiking in the mountains; this is a way to encounter local culture while walking the Trail. This section is one of the highlights of the new Shin-etsu Trail. 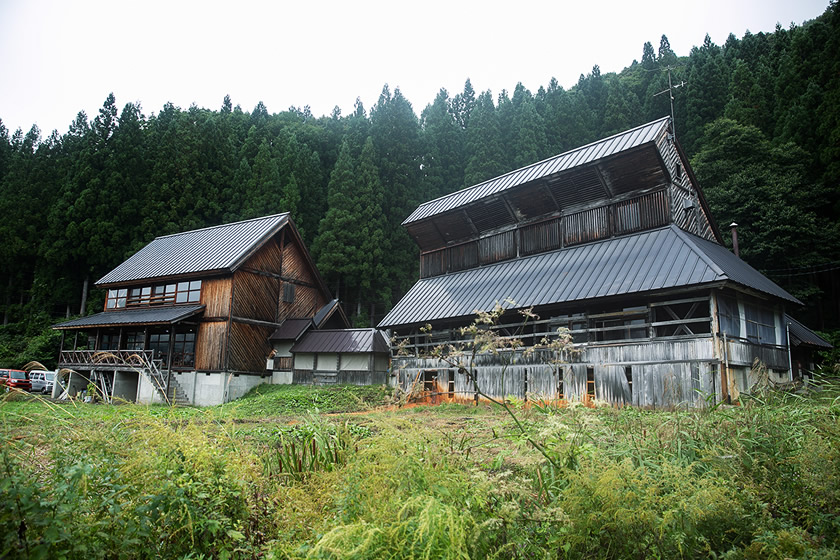 One building that stood out from a distance turned out to be a hot spring facility. It is open from April to the end of November (closed in winter)

When I arrived at Koakasawa Village, I dropped into the Rakuyokan hot spring, which I have been curious about.

It has unique reddish-brown hot water, and the atmosphere in the bathing area is something of a secret hot spring. The journey had been a long one, so even though I though nagayu (bathing for too long) was probably frowned on, I just relaxed and soaked in the hot water. 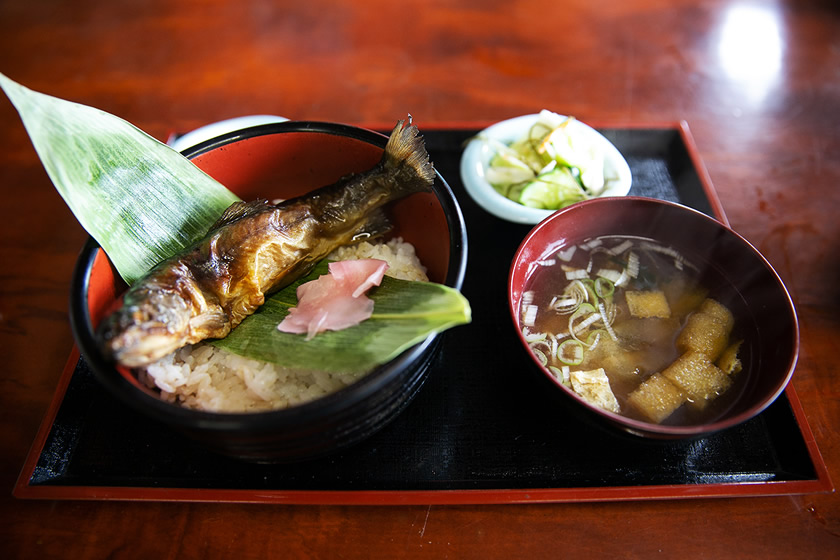 Lunch at Rakuyokan was their famous Iwana-don, a grilled char on a bed of rice

Follow in the footsteps of Bokushi Suzuki, who opened Akiyama-gō to the world

I had to hurry to keep going, but there was one detour I wanted to make in Koakasawa. This was the Naeba-so guest house.

I wanted to visit because this inn had a connection to Bokushi Suzuki, the 19th-century writer of a famous book, Hokuetsu Seppu (Snow Country Tales; Life in the other Japan). Bokushi came here in the early 1800s, and I was fascinated by him as a traveler as well as writer. 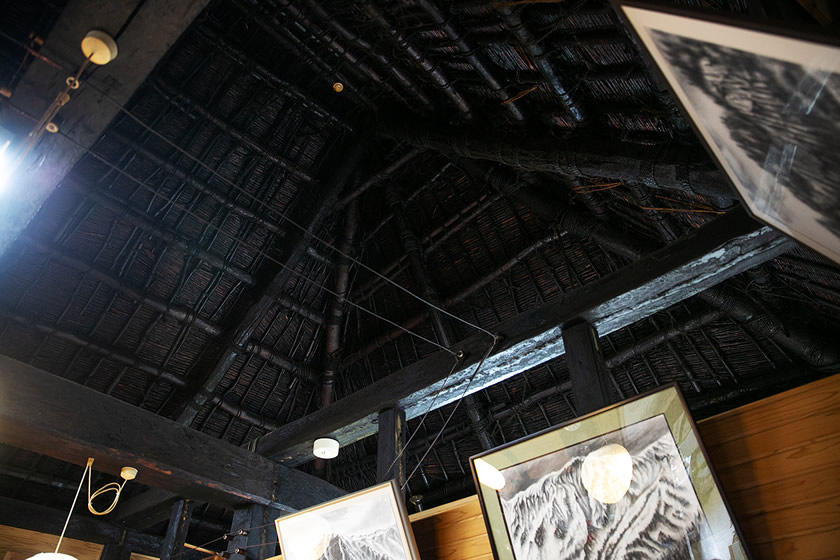 Naeba-so inn, remaining much as it was when Bokushi Suzuki visited in the early 1800s

Bokushi was interested in Akiyama-gō, which at the time was a completely remote area. He traveled here with a guide in 1828.

He stayed at what was a private home in Akiyama-gō, and which today is Naeba-so. I entered the inn, and greeted the female host. I sort of said hello to Bokushi, enjoying a cup of tea and looking at amazing structure of the ceiling that remains from the old days. 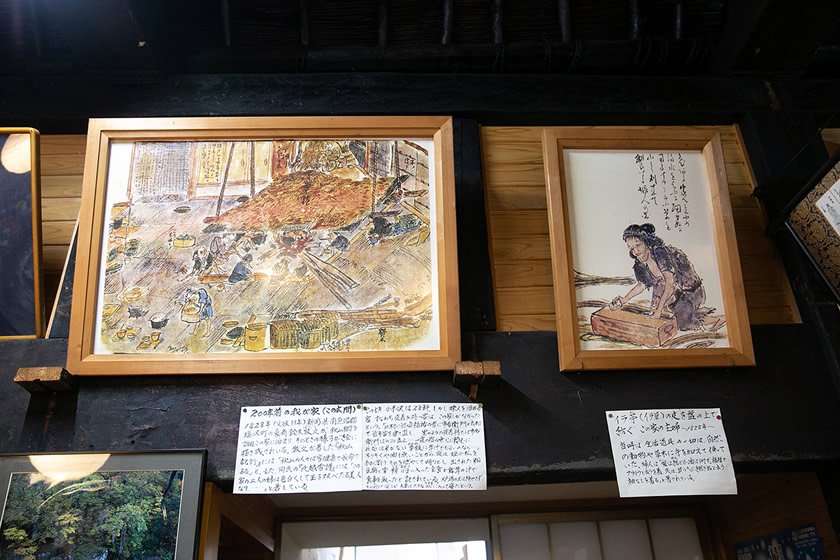 I wanted to be able to spend a night at Naeba-so, but I pulled on my hat—I had to head for the next village in Akiyama-gō. I spent just a little too much time on my detour. 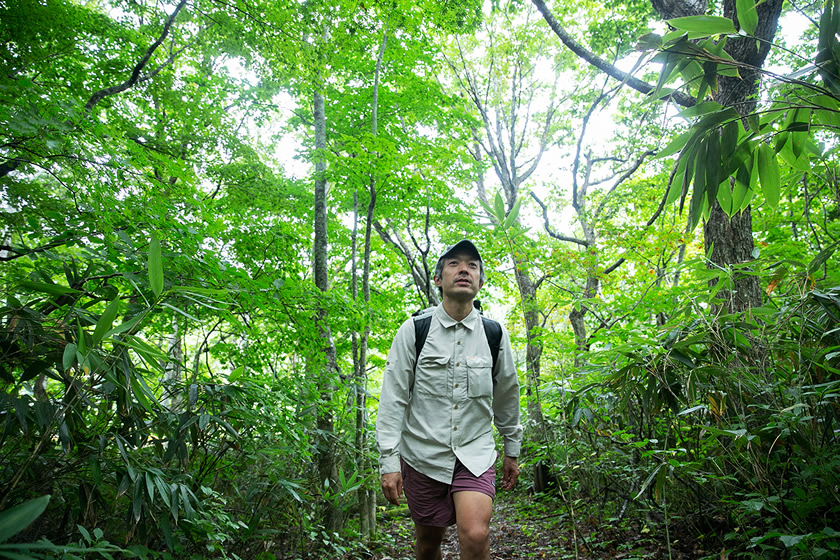 From Ōakasawa I walked on a paved road for the first time in a while. I entered an old road to the side of the Mikura Tunnel; at the end of the trail bypassing the tunnel is a private home.

You enter the Trail just in front of Mikura Tunnel

After leaving Naeba-so and heading to the edge of the village, I encountered the Bokushi no Michi—Bokushi’s road—that continues on to the next village, Ōakasawa.

From Ōakasawa I walked on a paved road for the first time in a while. I entered an old road to the side of the Mikura Tunnel; at the end of the trail bypassing the tunnel is a private home. 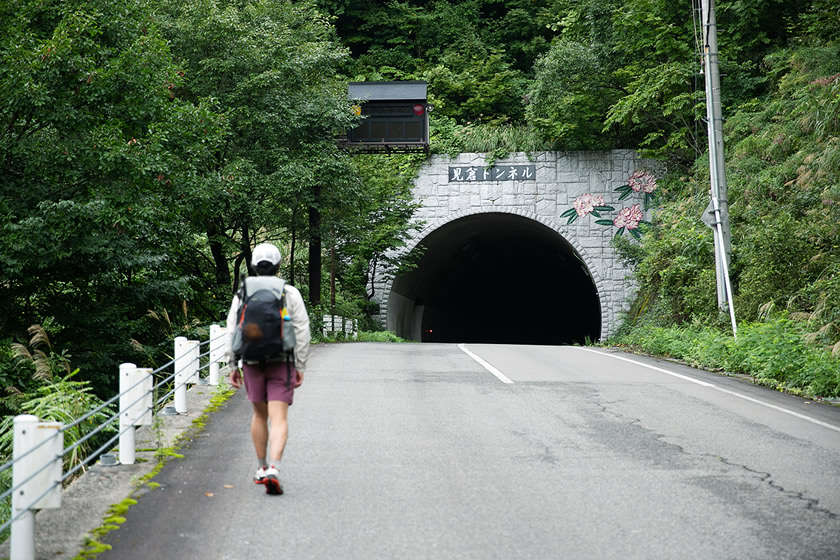 You enter the Trail just in front of Mikura Tunnel

The next village I came to has a completely different feeling from those I’d passed through. This is Mikura, made up of just four houses, and a place where an old-fashioned way of life remains. 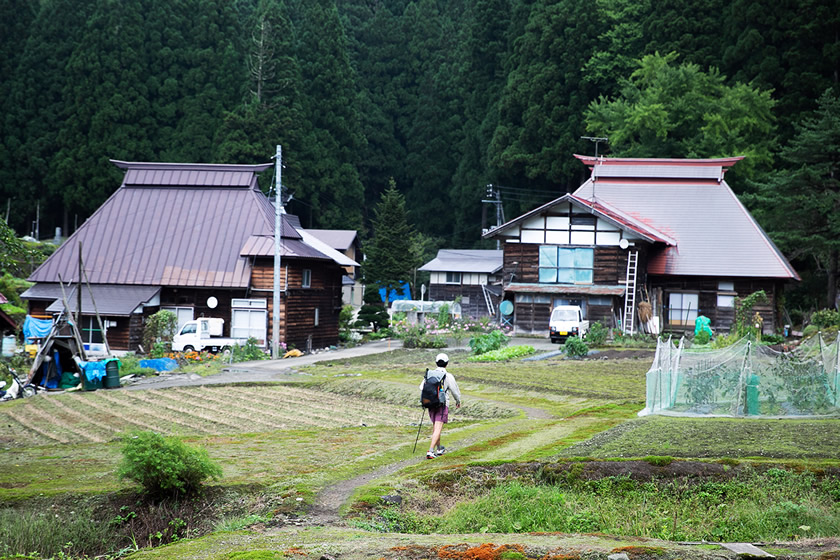 Traveling further on, I came upon a wooden suspension bridge. This is MIkura Bridge, connecting Mikura Village with Kettō Village.

From Mikura Bridge you get a wonderful view of the Nakatsugawa Valley. The flow of the blue water below the bridge is also beautiful. The bridge was the setting for a famous Japanese movie, and I really felt the power of this place. 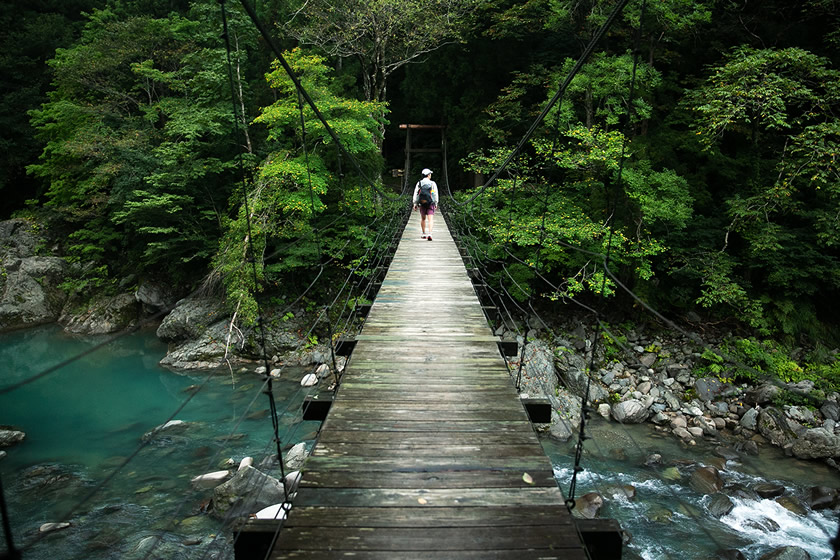 Just when the sun was about to set, I arrived at Katakuri no Yado in Kettō Village, my destination for the day. It was a good, long day of hiking.

Katakuri no Yado is a lodge using a renovated primary school. It even includes an onsen (hot spring) flowing right from the source. In addition, only those hiking the Shin-etsu Trail are allowed to pitch their tents in the former playground area of the school (advanced reservations are required). 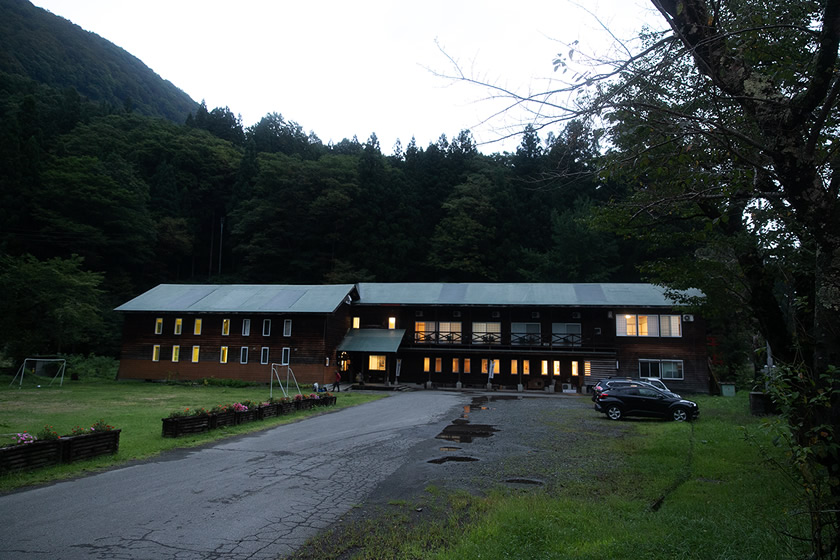 Katakuri no Yado, in a former primary school, in Akiyama-gō Kettō Onsen

The food here is very good, delicious homemade meals made with lots of sansai (mountain/wild plants) and local vegetables, and help get rid of the exhaustion of the day.

I soaked in a hot spring, ate delicious food, and, feeling happy, curled up inside my tent pitched on the former schoolyard and fell asleep right away.

Staying in a tent way out in the wilderness is great, but being a tent in a village like this this is part of the charm of hiking a long trail, especially one that connects mountains and towns. 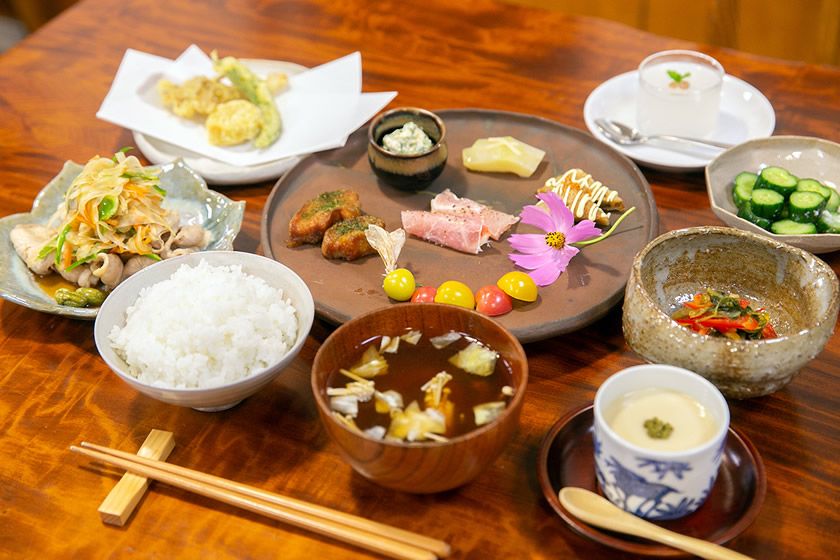 A meal at Katakuri no Yado, featuring wild and local vegetables. The delicate, carefully prepared meals are wonderful, and vary with the seasons